Particularly during the dry season (June – October), when even the best grazing areas dry up, Tarangire is home to gigantic herds of wildebeest, zebra, and elephants. Most of the park is savannah, ornamented by the spectacularly massive baobab trees, but there are also swamplands and wooded areas.

Tarangire is one of the few areas where the oryx can be observed. You may also be lucky enough to spot a giant tree-climbing python in the acacia woodlands. Leopards are common in Tarangire but difficult to spot as they tend to sleep in the trees throughout the day. You might also see hunting dogs, although not in abundance. The elephant herds are particularly spectacular and can reach over 300 in number. 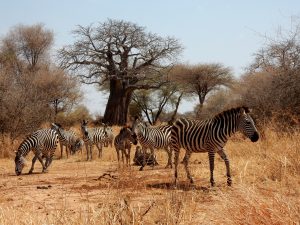 Driving in the park, observing elephants, sometimes very close to the campsite near the (dry bedding of the) river. Drive to Larmaku Swamp, a large swamp where you can find elephants and other animals, cooling down in the water and sheltering for the sun in the shadow of the acacia trees. Regarding encountering wildlife we can not guarantee anything, but the chance that you will see large herds of elephants in this park is 99,9%.

Wildlife viewing in Tarangire is best in August – October. July is a good month for safari, whereas November – March is fairly well for a safari.

Park Admission Fees and all Game Drivers are included. The activities below are optional and could be arranged for an additional charge.

Tarangire is a great bird-watching site with more than 500 species recorded. The swamp, tinged green year-round, have the most breeding species in one habitat anywhere in the world. The park also harbours several dry-country bird species at the extremity of their range, such as the northern pied babbler and vulturine guineafowl.

Best time for birdwatching in Tarangire National Park:  Birdlife is plentiful all year round, but is at its best when the European and North African migratory birds are present (November to April). Nesting among the resident birds is taking place during this same time, so it is easy to spot birds in their breeding plumage.