On safari in Ngorongoro Crater

The Ngorongoro Conservation area, home to the famous Ngorongoro Crater, is not an official national park and members of the Masai tribe do live within its boundaries; however, the wildlife in the area is overwhelming. Thousands of animals can be found grazing on the open plains of the conservation area and much more live on the slopes that lead up to Ngorongoro Crater. The crater itself is 11 miles (18 km) wide and contains over 25,000 large mammals alone.

Great drive through the Crater with a good chance to spot the full Big Five in one day. The Ngogorongoro Crater is one of the best places to spot the endangered African black rhino as well as large groups of lions. Lake Magadi, situated at the bottom of the crater, provides good wallowing for the huge water buffalo that gather at its edges. As you move through herds of these massive beasts, their stares can seem more challenging than disinterested. While enjoying your picknick lunch at the Hippo Pool, the hippo’s treat you with a concert of their grumbling en sputtering noises. An unforgettable day!

The best time for a visit to Ngorongoro: all year round. 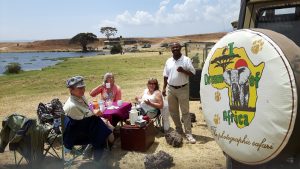 Park Admission Fees and all Game Drivers are included. The activities below are optional and could be arranged for an additional charge.

The Empakai Crater is about two hours drive to the east of the crater. A park ranger will join you for the one hour walk in the Empakai Crater. The views are gorgeous! If the lake is filled with water you can spot a lot of birds here.

Both the Ngorongoro highlands and the crater offer excellent birding, with over 500 species recorded. At times the lake is covered with thousands of greater and lesser flamingos. Sand-pipers, storks, the ever-present vultures and other birds will often be found floating overhead. Birdlife in the highland forest is rich and interesting. Among the birds to be seen are white-eyed slaty flycatcher and Livingstone turaco. A number of specialized grassland birds are resident in the crater. Most noticeable are the ostrich, kori bustard, crowned crane and the secretary bird.

Best time for birdwatching in the Ngorongoro Crater: although birdlife is generally good throughout the year, from November to April migratory birds from Europe and northern Africa are present, and many resident birds are in breeding plumage. 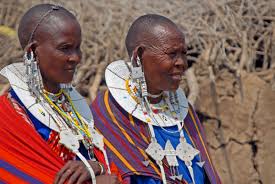 The Masai people have been given permission to live within the Conservation Area boundaries and as you drive through the area you will often espy the traditional red garb of the Masai. The Masai have never been a hunting people – they live from the milk and blood of cattle – and as a result get along splendidly in this large wildlife preservation area. The Masai are generally distrustful of photographs but some traditional villages have been opened up to tourism. They are happy to show how they still live by century old traditions.

Then this is the area to personalize your safari according to your wishes! Olduvai Gorge is the famous home of 1.75 million-year-old “nutcracker man” – known to the scientific community as Australopithecus boisei – one of the oldest known ancestors of man. The remains were discovered by Mary Leakey who was carrying out archaeological work there with her husband, Louis Leakey. The Olduvai Gorge site is extremely rich in fossilized remains and has yielded many types of ancient flora and fauna including 50 different hominids. The site consists of five layers, ranging in age from 15,000 to 2.1 million years.

Other archaeological sites in northern Tanzania include the Hominid trackway at Laetoli (the trackway is now reburied for preservation, a cast of the trackway can be viewed at Olduvai) and the spectacular ancient cave paintings north of Kondoa which can be viewed in their original state. For archaeology buffs, a visit to the 27 painting sites is a must.